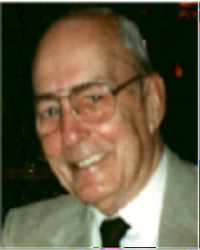 Past Chairman of Probus Centre (1998-9) Formerly Treasurer, and then Board
Chairman, Co-Publisher and creator of the first worldwide Probus Web Page

Bud was a Financial Manager, a life member of the Institute of Chartered Accountants of
Ontario, a Past District Governor in District 7070 of Rotary in Southern Ontario around
Toronto, subsequently in District 7010 since 1983.

Impressed with PROBUS after a 1987 visit to Australia/New Zealand, he assisted the Rotary Clubs of Collingwood and Wasaga Beach in forming the PROBUS CLUB of Georgian Triangle, which has operated with 250 members for several years since it began October 1987. The impetus through activity of two Rotary Clubs resulted by 1998 in 7 clubs and 1000 members.

Eight new PROBUS CLUBS (comprising at that time 10% of Canada), were developed by Bud in and around the Rotary Districts of Central and Northern Ontario.

An Executive member, he helped incorporate PROBUS CENTRE-CANADA, INC. on August 1st, 1995, and managed national finances. His wife June, a nurse, was named by the Toronto Don Mills Rotary Club as a Paul Harris Fellow of Rotary in 1978. They also worked together to publish in 1996 the first international Probus Web Page in the world www.probus.org to inform Rotary and Probus members. In 1999, he visited Leon, Mexico to encourage the expansion of Probus in Mexico.

In 1997 Bud became Chairman of Probus-Centre (Canada) Inc., and developed a Promotional program for Rotary with 44 Past Governors and other Rotarians across Canada, to inform and assist Rotary in new Probus club formation, with the objective:

"Every town and city in Canada needs a Probus Club."