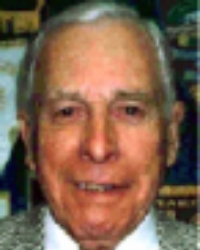 A Past President of the Rotary Club of Burlington, George was responsible for organizing the three PROBUS CLUBS in Burlington and assisted with clubs at Alliston, Hamilton, Brampton, Kitchener, Mississauga and Woodstock.

George has spoken at several Rotary Clubs, followed up with phone calls and mailed promotion material to several in District 7080 at his own expense.

He served as an active Board member of Probus Centre - Canada until shortly before his death.